October 26, 2018 — We are delighted to announce that E4TheFuture’s policy director is the recipient of an Energy Champion award from Keystone Energy Efficiency Alliance (KEEA) in Philadelphia. The energy efficiency advocacy organization chose Pat for its annual Vanguard Award because she is consistently at the forefront of change in energy efficiency policy.

“Pat is the rare policy wonk who can get deep in the weeds on policy, and also craft a compelling narrative that speaks to legislators of all persuasions,” said Matt Elliott, Executive Director of KEEA. “I am grateful to have met you so early in my career,” noted Elliott, “and to model KEEA’s unique approach to advocacy on your example. So many of us stand on your shoulders, and we are deeply grateful for the many trails you have blazed.” 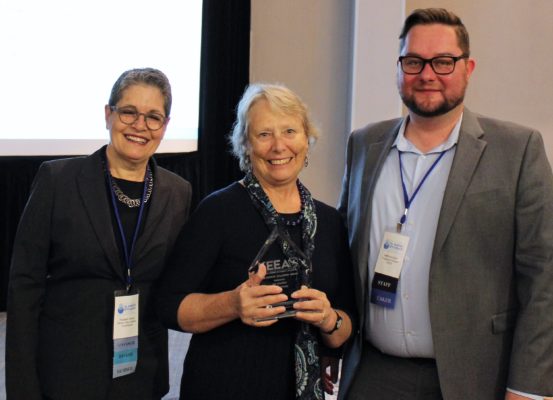 Liz Weiner, VP of KEEA and senior policy advisor at CLEAResult, remarked that “Pat has played a critical role in the EE world for many years. She is a rare combination of eternally optimistic and hard-headed, never sentimental. An engineer by training, she is grounded and practical and believes in real-world solutions.” Weiner said she’s always noticed that Pat’s “passion and energy are contagious, and you end up laughing and appreciating some irony or quirk of a situation.”