“If you can low crawl through cold wet mud under concertina wire while live fire shells whiz above your head,” says Rhett Major, “working in a crawlspace or attic is pretty much a piece of cake.” A veteran of the U.S. Army Reserve and National Guard, Rhett now thrives in his energy efficiency career. He is one of more than 230,000 vets who have chosen similar paths.

On Veterans Day, we pause to salute our current and former soldiers for their service to our nation. I also want to give credit to veterans’ contributions to the energy efficiency (EE) workforce. Energy Efficiency Jobs in America 2019 shows how vets are playing a crucial role. With technical skills, perseverance, and grit acquired during their tenure in the military, veterans are:

Pro Voices: Mike Hicks, Chris Rawlings, Chris Morin
I am glad to introduce you to veterans whose work impresses me, and whose skills–some acquired in the military–enable them to provide valuable service. These men found rewarding careers in EE. 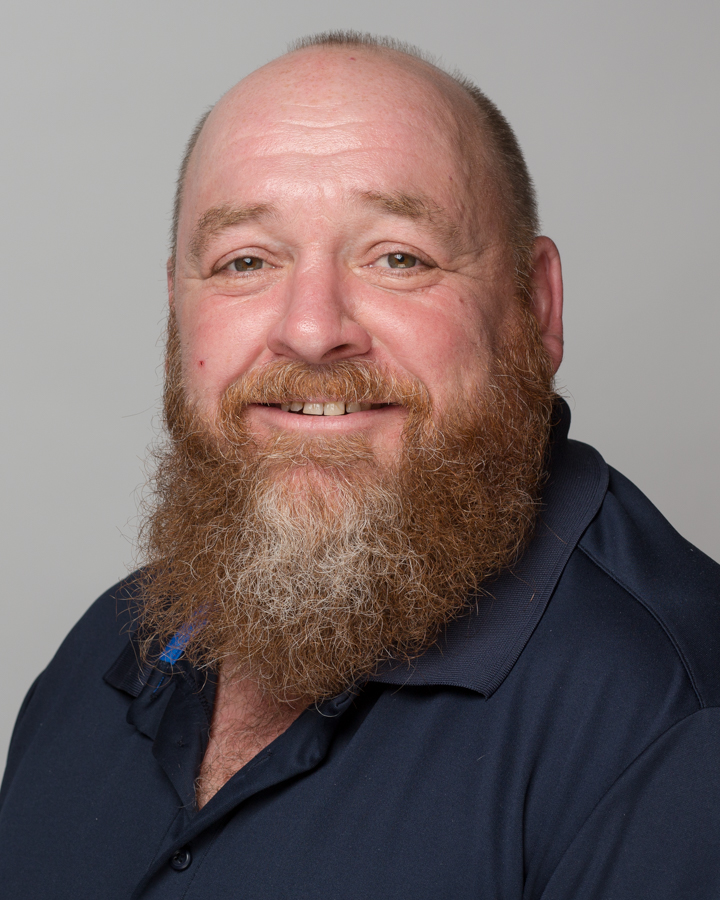 While in the U.S. Army, Mike Hicks says he “had to think outside the box in high stress situations.”

“As a Combat Engineer in the U.S. Army I specialized in horizontal and vertical construction,” says Mike Hicks. “We trained hard to get the jobs done right, on time, and to specified standards in any environment. We had to be able to think outside the box in high stress situations. These traits, along with a strong work ethic, inspired me to look for a career that would continually challenge me.”

Mike’s decision to make efficiency his focus has given him just that.

“No two jobs are the same,” he says. “Some homes are straightforward and for others you have to think outside the box in order to meet the standards. You have to have a passion for helping people.”

“Veterans are best suited for this field,” Mike explains, “because once you give a veteran proper training, tools, and standards for them to meet in order to accomplish the mission, you have given them purpose. And a veteran with a purpose can accomplish anything they are faced with.”

When he joined the industry, Mike started out on a crew doing retrofits and installation. He quickly worked his way up to a position as a crew supervisor. Now he’s an energy auditor at Coastal Community Action, a nonprofit in Newport, North Carolina working to develop solutions to poverty. Mike’s work improves comfort and reduces bills for low income families. He’s been in the field for over ten years. 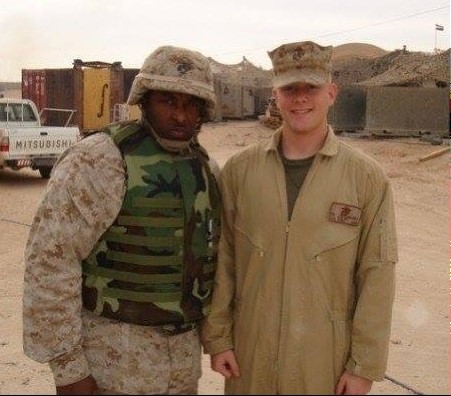 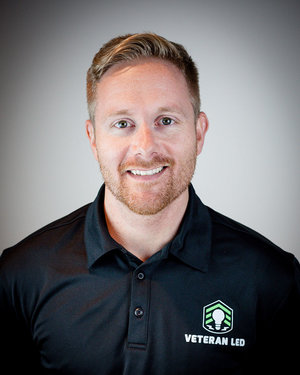 U.S.M.C. veteran Chris Rawlings is the Chief Efficiency Officer of Veteran LED and served in Iraq as an aircraft mechanic.

Chris Rawlings had an experience while in the military that directly sparked his interest in energy efficiency work. Chris served two deployments in Iraq as an aircraft mechanic. He is now Chief Efficiency Officer of a small but growing business, Veteran LED.

“I was working as a contractor with Northam-Grumman down at Fort Eustis on the army base and saw the [aircraft] hangers just wasting so much energy with leaking air hoses and HVAC blowing out the doors,” says Chris. “So I had this idea that there must be others out there with the same problem.”

He launched a commercial lighting retrofit business in 2014. Veteran LED now has five full-time and two part-time employees, plus a network of subcontractors. With offices in Virginia and Texas, Chris’s business has completed over 200 projects for commercial and industrial customers in a dozen states.

In 2019, Chris Rawlings launched the Energy Sense podcast, where he invites guests to delve into the latest efficiency sector trends. The first episode is Chris’s own story about “lessons learned along the way building his company into a multimillion-dollar business,” How to Succeed as an Energy Efficiency Entrepreneur and Why the Industry Matters. 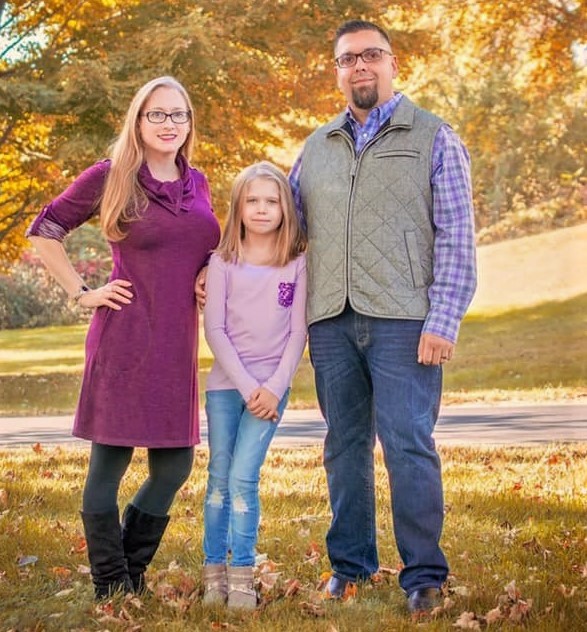 Chris Morin with his wife Cassy and daughter Charlotte. A United States Marine Corps veteran, Chris is an HVAC expert at Mitsubishi Electric.

“Transitioning to a job where I was heavily invested really helped me get out of bed most mornings. This was so important to me that I went to the Human Resources Department and lobbied that they talk with the local VA about hiring programs.”

“Military veterans are the hardest working, most responsible, caring people I have ever met,” says Chris Morin. “Some just need a purpose – one bigger than themselves, like impacting climate change or making thousands of families more comfortable in their homes.”

For those in the industry at large, Chris advises:

“The troubles that most [veterans] go through after unspeakable sacrifices [allow them to be] the best leaders…Please consider [giving priority to] a hard working leader that put their life on the line to protect our freedom for your next open position in this field. You may just be helping a veteran more than you know.”

In addition to his day job, Chris authors the HVAC Pro Blog, where he advises readers on residential system design, quality installation, and system diagnosis.

Faces of EE
We invite veterans — and all members of the EE industry — to join E4TheFuture’s Faces of EE initiative highlighting EE workers. We are making the “unsung heroes” of energy efficiency more visible.

If you are interested in spreading the good news about the vital EE workforce in America, you can download state-specific fact sheets and resources. You may also like my previous blog on vets in EE, with statistics from E4TheFuture’s 2018 Energy Efficiency Jobs in America report. Strong energy efficiency policies help create fulfilling, stable jobs for the veterans who have served our country.

Thank you, veterans, for your service and your work for cleaner air, lower energy bills, and more resilient communities!

A Few of Our Heroes: Veterans in EE 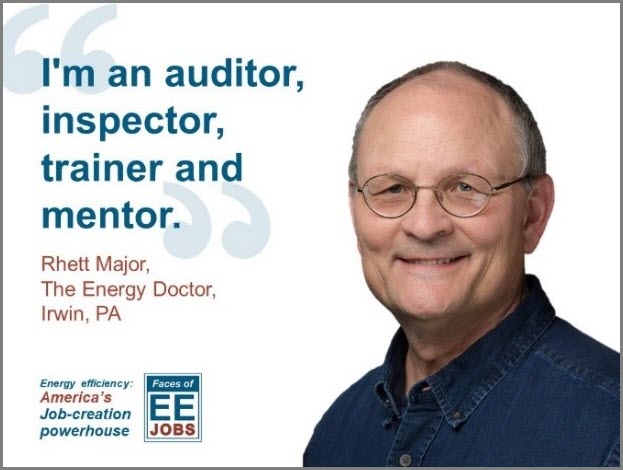 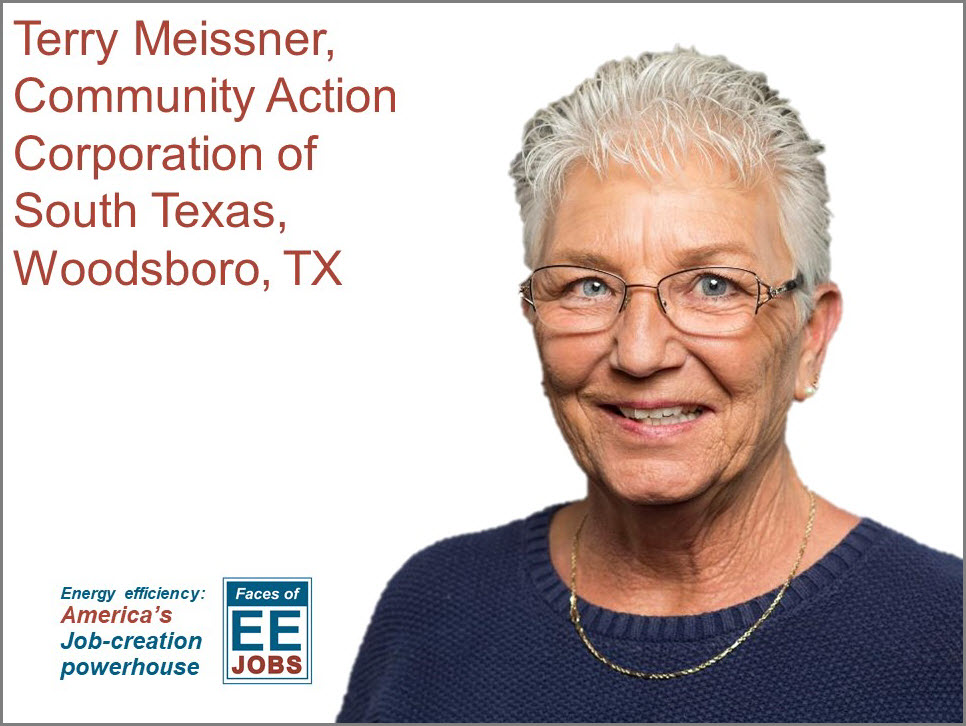 Terry Meissner served in the U.S. Army. Now she’s a weatherization manager responsible for 17,000 square miles of Texas. Her agency provides services to ~400 homes each year making them the second largest weatherization provider in Texas. 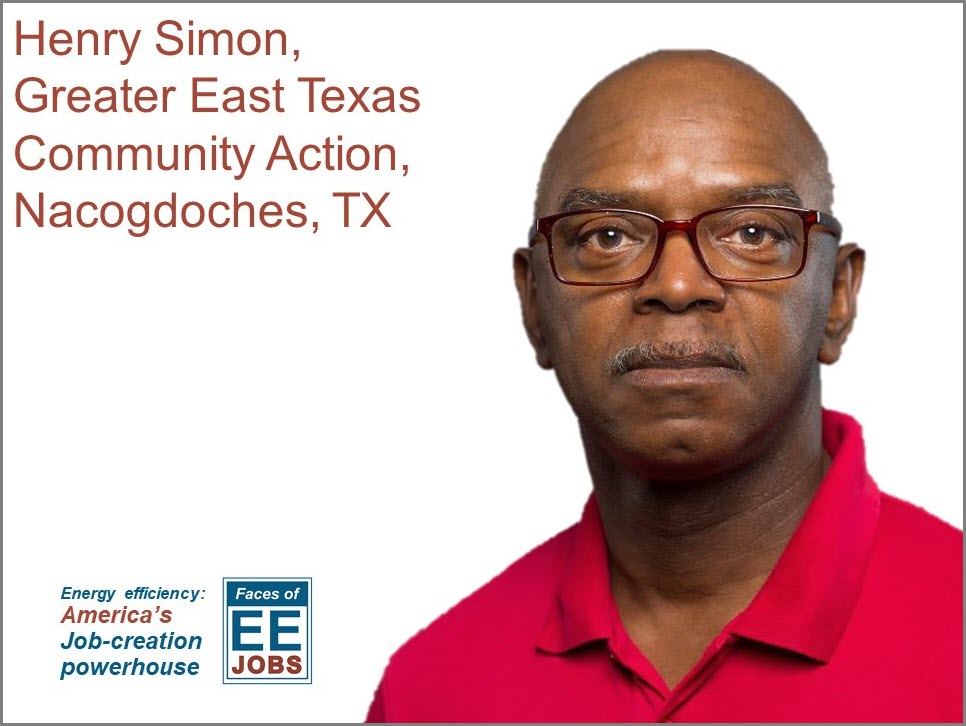 Henry Simon served in the U.S. Army for 23 years completing two tours in Iraq and one in Afghanistan. Now he works on weatherization assessments and energy audits. 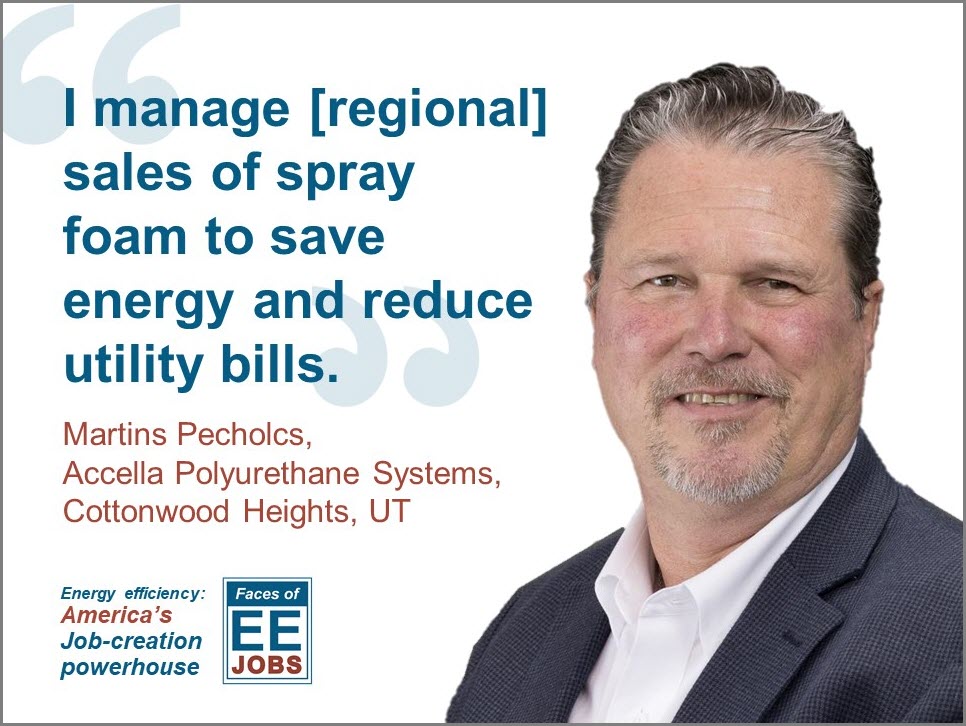 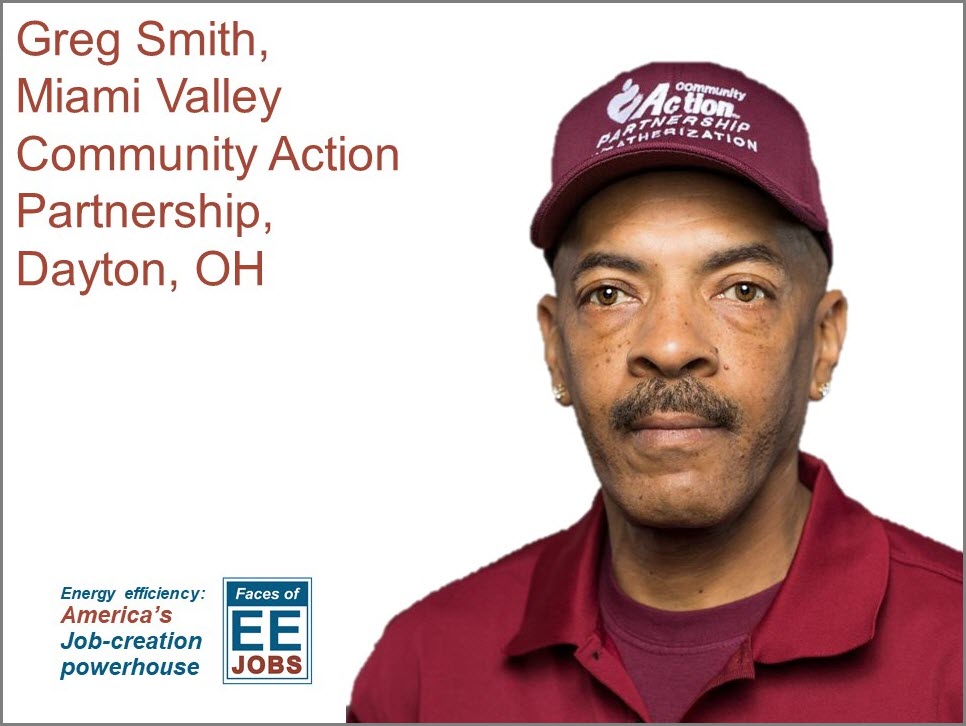 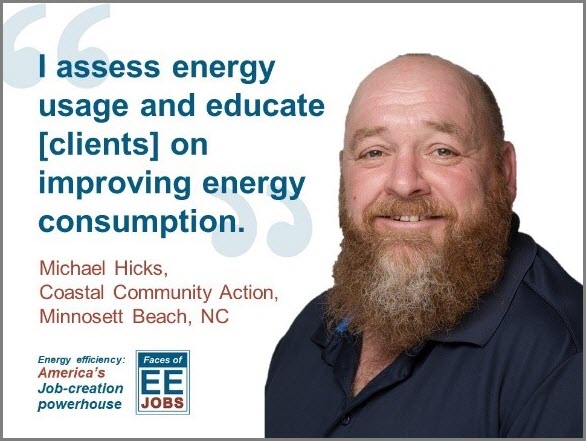