Industrial Symbiosis: Taking Resource Efficiency to the Next Level

You may remember the term symbiosis from eighth grade biology. It’s the concept of organisms sharing materials, energy, even their bodies – with other organisms for the benefit of both species. The idea of applying symbiosis to industrial producers was pioneered in Denmark almost 50 years ago in 1972, and came to fruition in 2015 with the establishment of the Kalundborg Symbiosis Industrial Park.

At the site, multiple manufacturers operate under resource sharing agreements. Each member company works to increase energy efficiency and reduce waste by analyzing its waste energy and industrial byproducts and offering them to other entities in the partnership, while availing itself of excess resources offered by other partners.

The companies, including biotech giant Novo Nordisk and St. Gobain subsidiary Gyproc, share waste heat in a district heating configuration, recycle manufacturing residues into marketable products, utilize waste steam for cleaning, filter water, reduce pollutant releases, and provide feedstock for the biomass plant that produces clean energy and fertilizer for farmers. This reuse of energy and waste lowers operating costs and reduces carbon emissions while preventing usable byproducts from ending up in landfills. It’s a true example of a circular economy at a big business scale. 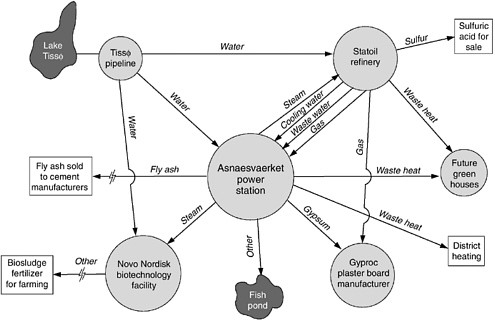 The theories behind these configurations draw from (and/or are aligned with) sources such as The Ellen MacArthur Foundation’s principles of a Circular Economy, and William McDonough and Michael Braungart’s Cradle to Cradle framework. Both espouse the need to keep resources in circulation or return them to nature harmlessly and focus on the reduction of waste at every level of a product’s life. Industrial symbiosis adds an element: Spurring economic development by keeping product manufacturing close to raw materials and reducing operation costs by producing and reusing energy locally.

The Industrial Symbiosis model has been tried in other parts of the world, e.g., China and India – with varying levels of success. Most attempts, from the mid-1990s to the mid-2000s, aimed to develop “Eco-Industrial” parks but rarely emerged from the planning process.[1] Since then, costs for extracted resources and industrial materials have skyrocketed while clean energy technologies have experienced significant price drops. Could this be the time for a re-boot under more favorable economic conditions amidst pressing climate action concerns? European Union countries are refining the methodology for industrial symbiosis and developing software to exchange information and enhance replicability throughout the region through efforts such as the FISSAC Project.

Industrial Symbiosis as a Bipartisan U.S. Solution?
I recently attended the Biocycle 19 Conference in Portland, Oregon where Rhys Roth, Executive Director of the Center for Sustainable Infrastructure spoke about how the technology and climate benefits inherent in industrial symbiosis make 2019 a promising time for the concept to re-emerge. In 2018, Roth and a bipartisan delegation of Washington State lawmakers toured Kalundborg. Comprised of six Republicans and six Democrats, the group learned about the benefits and challenges of designing and implementing similar projects in Washington. Their trip resulted in the introduction of state legislation, SB 5936 that will provide funding for the inventory of existing waste streams and the garnering of data that will document producers with potential off takers of energy and material flows. This information could be used to construct complementary resource partnerships that could develop into physical resource hubs consisting of manufacturers, utilities, local natural resource processors (i.e., fisheries or forest product producers), and district heating zones for residences and businesses.

If the concept works well in Washington State, I look forward to seeing it replicated in other areas of the United States.

Industrial symbiosis projects require careful design. Changes to the resource hub – for example, when a member relocates – can have far-reaching effects on their neighbor’s operations. Further research and documentation can find the best synchronicities between “waste and want” models that will provide maximum environmental and economic benefits. Still, coupled with a foundation of energy efficiency measures and technologies, it might provide the long sought-after next level of efficiency.